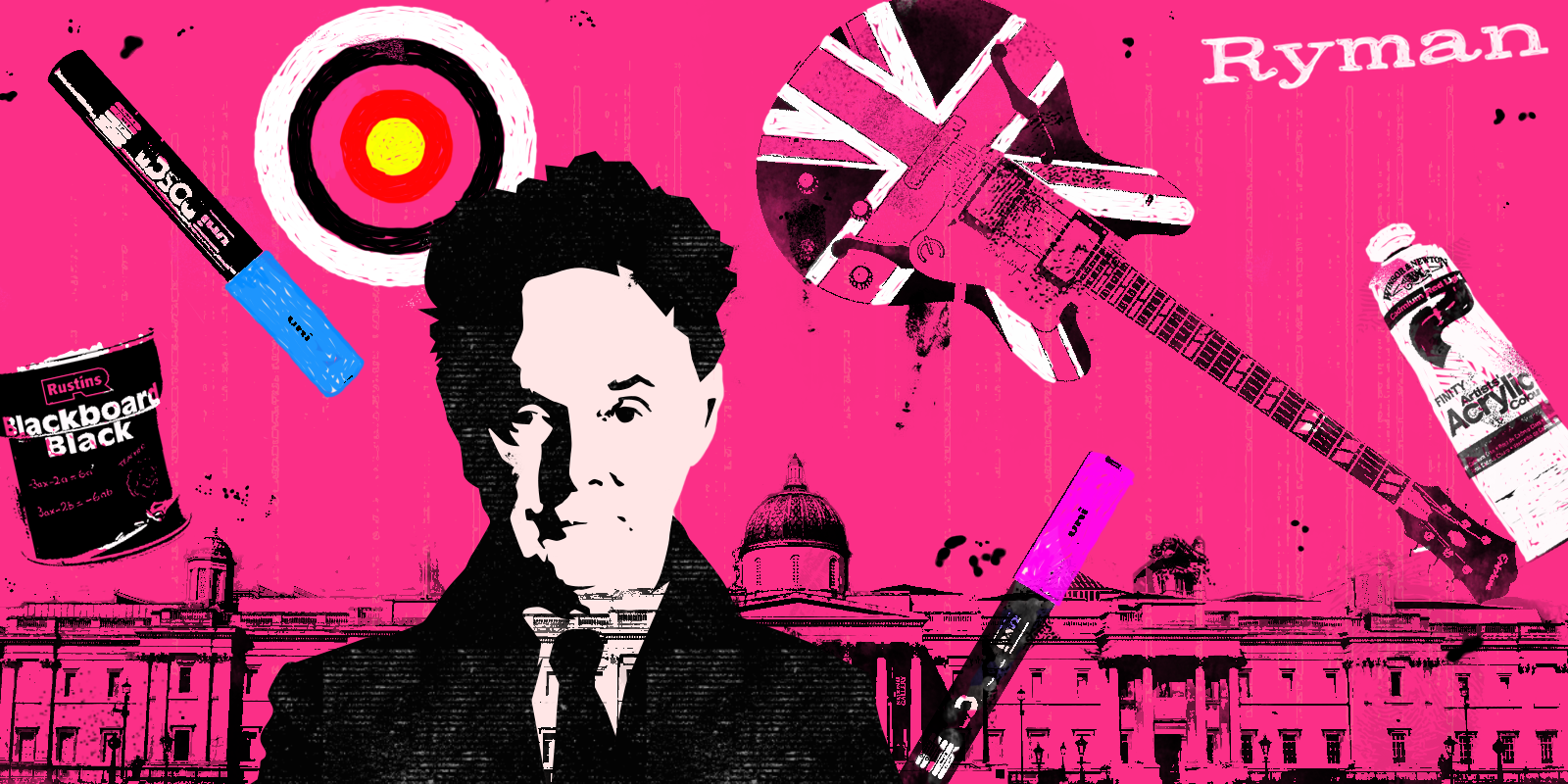 Blackboards, The Sex Pistols, Britpop, Diana, Sgt. Pepper and me

Back in the Nineties I worked as a freelance blackboard artist in London. I came into contact with all sorts of people, and the occasional celeb. As no one cares about blackboards, I’ll write about my celeb spotting.

No fun in Ryman’s

My favourite, as it was so ridiculously surreal, while queuing for art supplies in Ryman’s stationery shop on Tottenham Court Road, I found myself behind Malcolm McLaren, the Sex Pistols creator and manager, amongst many achievements.

He was buying photocopy paper. It got exceptionally awkward when the long queue dog legged, and I was then facing Malcolm as he faced my left. It went on for an eternity. It really felt like I should have said something, but other than ‘see much of Johnny then?’, my mind was blank.

And anyway, there’s no point in asking, you’ll get no reply. (That’s a Sex Pistols lyric kids). 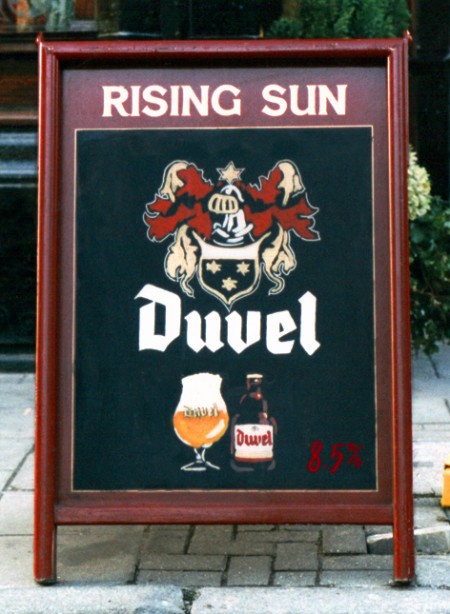 25 metres from this blackboard on Tottenham Court Road, (painted by me) I queued behind Malcolm McLaren. Blue plaque, not shown…

Me and Princess Diana

In a chic/relaxed Italian restaurant in Covent Garden. I was painting their blackboards in a corner of the restaurant. They had a lot of boards, I was working there all day. I had worked through the lunch crowd coming and going, the evening crowd was beginning to come in, and the restaurant was filling up. I offered to come back the next day, as I was taking up a seating space. They said it was fine to stay, it was a talking point, me painting, and they wanted them finished. It’s filling up more and more, their staff giving me reassuring looks that it’s all fine (my father was a chef and restaurateur – I grew up in that world). The tables are tightly placed, with a long padded bench against a wall shared between the tables. There is one last free table next to me.

A large group comes in, and are seated next to me. There is a little bit of a fuss going on in the restaurant, it appears a regular, who is also famous, is in the room.

I am now sitting shoulder to shoulder, literally touching, the then England rugby captain, Will Carling. It was alleged in the UK press a few years later, he was having an affair with Princess Diana at this time. I don’t think she was there. I was busy painting, but I’d think I’d have noticed.

Working in public with an audience was very normal for me by this time. Having begun in the job of blackboard artist choosing to take boards into freezing cold beer cellars, rather than be in public working. I gradually learned, I did in fact enjoy working in public. It became like a performance. People would sometimes watch me work for ages, a small audience on a number of occasions. Everyone really, really kind, and positive. I often picked up new clients this way. The occasional ‘you spelt that wrong mate, ha, ha, ha’. All good natured fun.

So when the very famous rugby player sits next to me, I know how a ‘normal’ would behave.

Not a word was spoken, in our exceptionally tight little space.

Now he’s a rugby player, I’m six foot one. He doesn’t know I’m Scottish. He doesn’t know, I know who he is. (It’s central London, everyone is from everywhere) A little impasse begins. He begins to encroach into my space, I find myself getting a bit bigger, also filling more space. He kicks my tool box he probably hasn’t noticed under the table. I kick it back again. We both know we are doing it. Behaving like a child. He started it.

Then the boards were done and I had to go. To be fair, what actually happened was, the wine and conversation kicked in at his table and he got distracted. Only after I’d won though.

The pinnacle of my career

I walked past the artist Sir Peter Blake (Sgt. Pepper album cover and … and Sir Peter Blake FFS) on Charing Cross Road carrying my toolbox of paints and paint pens, on my way to a job, and got a smile and a nod of acknowledgement (He was artist in residence at the National Gallery at the time). I was mystified that he’d done it, and sat in a cafe for an hour with my head spinning. (A new cafe called Pret a Manger. I wonder if they ever took off) I’d have had a bit of paint on me as it was impossible to not look a bit arty/filthy, also on my toolbox and bag. That subtle nod of acknowledgement, the absolute pinnacle of my artistic career.

As a blackboard artist I was in the very heart of central London a lot. So many business’s vying for trade, and with the budget to pay for blackboards. This also gave me the opportunity to pop into The National Art Gallery at Trafalgar Square and say hello to Rembrandt’s self portrait in my lunch break, several times a week. Or Manet’s Barmaid at The Folies Bergere at The Courtauld Institute on The Strand just along the road. So the paintings seeped into my work. For a while, one of my proudest skills, was being able to automatically find my way to the Rembrandts in the National. On a recent visit to London, screwed up spectacularly, and had to ask for directions three times. Getting old. 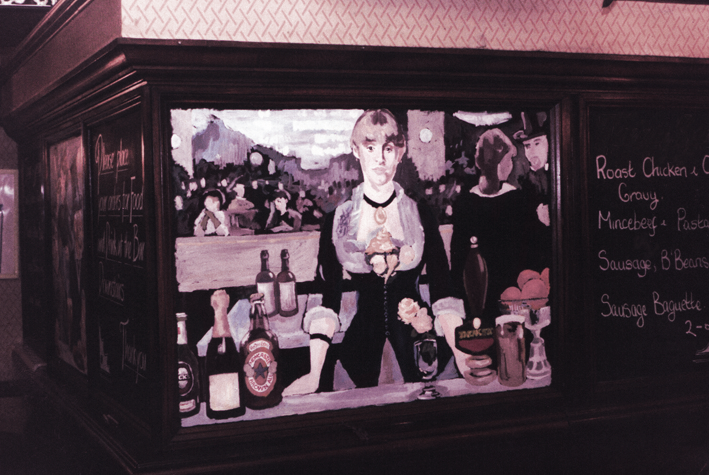 Tired of painting Fish and chips and pints of lager, I’d paint copies of the paintings I loved when I could.

On Charing Cross Road, a sunny Saturday afternoon on my way back from a job, the street filled with shoppers, six deep in both directions, and who’s coming the other way, but Noel Gallagher and his then partner Meg. It’s the very height of Britpop.

In the interest of blending into the crowd, Meg was wearing harlequin leather trousers. It’s difficult to describe just how famous Oasis and the whole Britpop thing was at this time, and how ridiculous it was to see Noel and Meg walk up one of the busiest streets in London, at the busiest time of day, on the busiest day of the week. Perhaps drugs affect your decision making. Who knew?! Anyone who heard the Be here now album.

Noel’s eyebrows were positioned in a way that can only be described as, ‘don’t even think about it’. Myself and the person walking next to me, we were not together, slowly turning to look at each other, both giving a gentle nod to each other, to confirm what we had just seen.

You know when something is big in London when strangers interact. 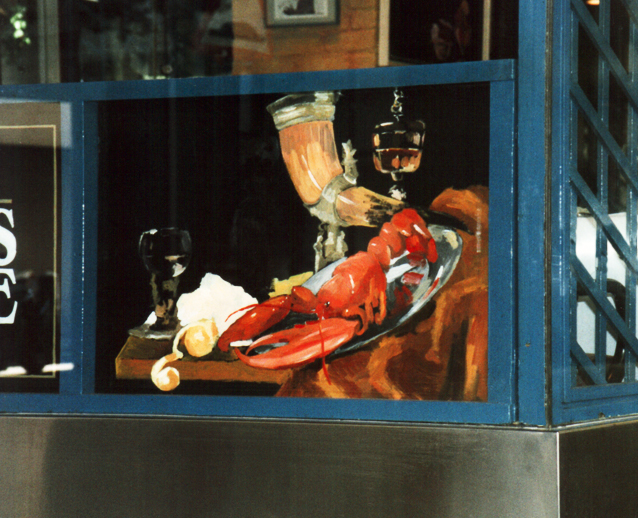 Based on a painting in The National Gallery on Trafalgar Square, this restaurant was 100 metres from the art gallery.

Then were a number of others. But overheard conversations from people that had forgotten or were oblivious to the blackboard artist being in the room was my favourite. A young upper class couple in an exclusive restaurant close to Buckingham Palace, about midday, the only customers, while I was up a ladder painting a board. After various chit chat, he said ‘you know, I’ve always found you very attractive’, to which she replied ‘of course I know that, I remember from the last time you made a pass at me’. Followed by the most Hugh Grantesque Four Weddings apologies, while I tried to keep working on the board with my back to them, shoulders shaking trying not to laugh. Weird what you remember. Whatever happened to that young beautiful posh couple? Did they hook up? Is he still chasing her? Is he still in the friend zone?

Am I a part of a, how I met your mother, story? 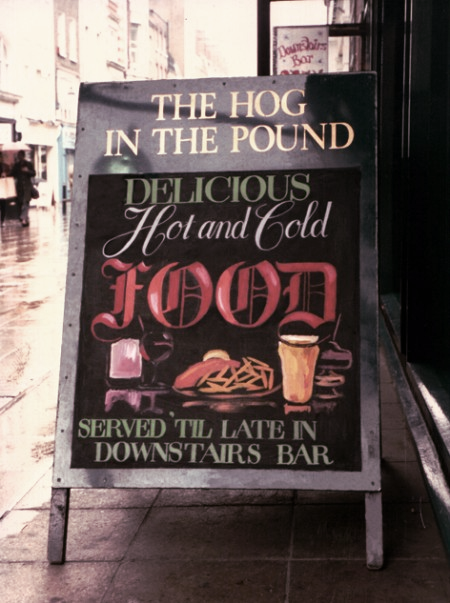 Wine, beer and fish and chips, The Hog in the pound on Oxford Street.

And if you are interested in seeing more of my blackboard art it’s here.