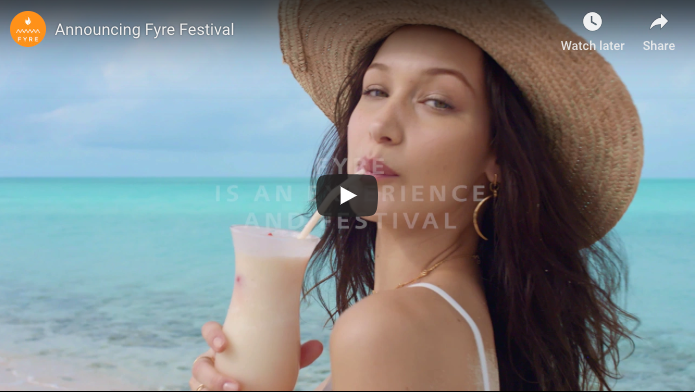 FYRE: The Greatest Party That Never Happened is a fantastic Netflix documentary on the Fyre Festival. The documentary tells the story of the festival, which was marketed as the ultimate luxury festival on an island in the Bahamas, and was a complete disaster due to chronically poor planning and financial impropriety. The main organiser is currently in prison for fraud.

Watching the video again, even knowing it was a disaster, there’s a bit of me, that would still like to go.

I often meet clients and potential clients who have a business or service that is a great concept. However they don’t have, or won’t allocate the funds to market this concept properly. The complete opposite of Fyre Festival. It’s sad that the power of marketing isn’t trusted given it’s importance in business.

In an extreme example recently, I was approached by a potential client regarding a logo design. She’d liked my portfolio, we discussed my work process. I then told my price. The client got back to me later the same day, to tell me she had just bought a logo ‘on the internet’ for ten dollars. She was proud of this, and wanted me to know it. The fiverr mentality.

Firstly I wish that woman the very best and her business every success.  But skimping on, or not investing properly in the logo, the design, the marketing is such a short sighted way of opening or running a business.

So what did the Fyre Festival design people do? Look at the video above. The models are the A listers, the very best. I’d say the camera people are also the very best, they knew they’d need a helicopter, despite the cost, they knew the weather had to be just right. The editors, the design company behind the logo, the brand, the music. Everything is the very best. That’s why it reached so many people, was massively over subscribed. Was a huge *marketing* success.

FYRE: The Greatest Party That Never Happened is on Netflix.

Iain Cameron is a web designer, graphic designer and illustrator based in Copenhagen.